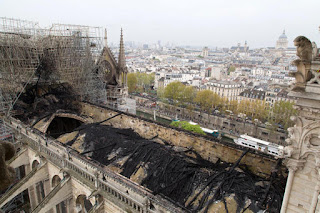 This drone footage is excellent. You got to give it to whoever put up that scaffolding. Even with all the water and the spire falling the scaffolding held.

André Finot, Notre-Dame's spokesman said, there were "smoke detectors everywhere" that were connected to the cathedral's safety HQ at the presbytery, where a firefighter is posted 24 hours a day.

This article is about Britain's most famous cathedral York Minster which was completed in England in 1360. It's the same style as Notre Dame. They had a fire in 1984 and had to restore the burned roof. They installed fireproof compartments into the roof to keep flames from spreading in the future.

ORIGINAL: While the fire at Notre Dame Cathedral in Paris, France is a heartbreaking architectural and iconic loss it is also a monumental teaching moment for building structures that can survive fires. Vincent Dunn a fire consultant and former New York City fire Chief stated “These cathedrals and houses of worship are built to burn. If they weren’t houses of worship, they’d be condemned." That is exactly what happened with Notre Dame. First, some background on the fire.

The fire started in the attic under the 300 foot tall oak spire.  The attic is made up of long wooden trusses. Once these massive timber structures start to burn they can almost never be stopped. This is why in the United States we no longer build two story homes with tall horizontal wood members. History has shown that a fire started in the kitchen which is generally on the first floor quickly burns to the second floor where the bedrooms are located. Once the beams are on fire they are almost impossible to extinguish.

After Notre Dame's attic was on fire the roof and oak spire started burning. Eventually the spire fell sideways. By then the entire roof was aflame. Two thirds of the roof collapsed into the building creating holes in the stone ceiling of the cathedral. In the below pic you see the burned roof on the floor of the Cathedral.

Another difficulty was the height of the Cathedral. Originally it was built to be a fort-like structure to protect the interior. A fire department would need tall ladders and hoses with enough pressure to reach the roof which was 115 feet tall. The fire department did not have the proper equipment to effectively reach the roof.

All that said the fire department did an amazing job fighting this fire and eventually extinguishing it by morning. They were able to save many artifacts, sculptures and paintings. Most of the stained glass windows were also saved besides the two bell towers and a good portion of the interior of the Cathedral.

Going forward there are many things that can be done when they rebuild the structure to better protect it from risk of fire.

1. There are no longer long wood trees to rebuild the trusses. They should be built out of flame proof metal and other materials.

2. Fire breaks should be installed in the attic and in other parts of the cathedral. Fire breaks can stop fires from spreading or at least slow them down and limit the damage they can cause. This can include fire doors and breaks between the ceiling, attic, floors and roof.

3. There should be fire sprinklers on the top of the roof, under the roof and in the attic. This would have stopped the spread of the flames and flying burning embers. The sprinklers have water and fire retardant liquids.

4. The smoke, fire detectors need to be more sensitive. They also should immediately show where the smoke, fire has been detected in the building. Maybe there should be video camera in the attic and on the roof.

5. The Cathedral like most monuments should have its own fire department with firefighters, equipment, water supply and water hookup to the Seine river. For a roof fire there must be ladders and hoses that can reach the roof. They should be in place so they can instantly have hoses on the roof that would not also burn if the roof burns.

I hope other similarly built structures will learn from this travesty so they can better protect their structures. These are just a few suggestions from a real estate appraiser with over 35 years of experience.