An example of one cause of housing crisis. Apartment buildings sell and new owner raises rents. Mary Cummins 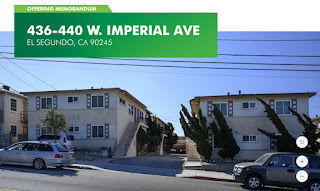 The property was listed as a "value-add property." It states rents are 35% under market which they are. Cost per unit is $312,500 which is low. LA CPU more like $500K though this building built in 1954 and probably needs kitchen, bath upgrades. Gross rent multiplier is 19 which is very high. It's high because rent is low. It market rent were used it'd be 12 which is about right.

Below is MLS listing.

Below is Loopnet listing.

This has been happening all over Los Angeles County and the state because of the housing rebound. It's one reason for the housing crisis. The current tenants will not be able to find another two bedroom unit for $1,100. They will have to pay $2,100 which is market rent. As the units are all two bedrooms at least two people live in each of them paying half each or $550/month which is insane cheap rent. Time will tell what happens to these tenants. A wise tenant would have realized that cheap rent wouldn't last forever. They should save money and look for a higher paying job. People on fixed income, retired, won't be able to find another place at this rate.

New owner will raise rents, tenants will move, they will renovate unit and re-rent for market rent.