What's concerning is the number of certified residential is 4,988. You must have a Certified Residential appraiser for loan purposes if the loans are backed, insured by the federal government. You can also be a certified general but CR is the minimum needed. Number of trainees doesn't matter that much because business is way down now because of increasing interest rates. I doubt most get their final licenses because there won't be any work. You also need a minimum of two to three years of experience to get work. I wrote about this in a previous article about the problems with the trainee model.

ORIGINAL: Above is a chart of the active licensed real estate appraisers in California per the California Bureau of Real Estate Appraisers. The numbers are also in a table below. This includes Trainee, Residential, Certified Residential and Certified General. The numbers aren't taken from the exact same time every year because that is how they reported it via their website. Most were November of each year. The numbers came from the Spring or Winter Newsletter reports. The specific dates and numbers are listed below.

In Spring 2009 the head of BREA (then called OREA) Bob Clark  stated "With the unprecedented appreciation in real estate values, OREA experienced a dramatic increase in licensing activity, going from approximately 18,800 licensees in 2005 to over 20,100 licensees by the beginning of 2007. With the decline in the real estate market, the pendulum has swung in the opposite direction, with a current license population of approximately 17,300."

The peak before the Great Recession was about 2007. Homes had appreciated greatly and rates were low so everyone was buying, selling and refinancing. This caused a huge demand for real estate appraisers, agents and mortgage brokers. There is always a large influx during these times. It is expected to lose licensees as the market slows because there is less business. Appraiser licenses renew every two years today. It makes sense that licensees would not renew their license when it expires after the slowdown. For this reason there could be up to a two year lag between the slow down and loss of licensees. Some got their license to appraise as a side gig. Licensees doesn't mean they are working appraisers or full time working appraisers.

Below is a chart of the U.S. National Home Price Index. You can see the 2007 peak and subsequent Great Recession. You can also see our current crazy market.

One would expect an increase in the number of appraisers when the market heats up like it has done within the last few years. Oddly enough there is no increase in the number of licensed real estate appraisers. I believe one of the reasons there hasn't been an increase is because of the current Trainee Appraiser Program. Today a new real estate appraiser must work at as Trainee for a licensed, experienced Appraiser for a certain number of hours. That is difficult to almost impossible because licensed Appraisers generally don't want to mentor trainees. Nothing to gain, everything to lose. I wrote an article that outlines the problems HERE with possible solutions.

The market is expected to continue to appreciate though not at the crazy rate of 2020 and 2021. Some lenders, mortgage brokers such as Better.com have already eliminated some lending agents. One of the reasons it will slow is because the Fed has stated they will increase interest rates in 2022 maybe even more than once. Another reason is lack of inventory and many being priced out of the market. While some Appraisers were busy and had lag times within last six to 12 months things have already slowed and not just because of the holiday time of year. We may not need more appraisers.

The Government stated they are working to understand the Appraiser issue. By the time the issue is resolved there won't be a need for as many because of the market. Things have already slowed and will slow further. Maybe we just don't need as many appraisers as we did in the past. Today some lenders use appraisal waivers and AVMs. This could end up being a non issue.

Some lenders, AMCs, others are stating there aren't enough appraisers. This isn't true. There may not be enough appraisers today willing to do desktop appraisals for $65-$130. Most appraisers don't want to do desktops because of the liability issue. The law and form states we must agree that we have enough verified data to complete the assignment. If you don't do the inspection, drive the comps, you don't have enough data. What if there's a major defect in the property, area, comp photos are photoshopped... Then the appraiser is on the hook for any loss. It won't matter that you relied on the inspection by John Doe and comp photos on MLS. You're still liable. Why accept the same liability for 1/5 to 1/3 the payment?

Below is a cartoon about the issue. It's an older cartoon but it rings true today.

AMCs, Lenders, others want to make it super easy for new appraisers so they can recruit newbies to underpay. Some AMCs, Lenders are offering trainee hours in house. That looks like influence to me. Some want certain people to be able to easily get appraisal licenses for other reasons. There is an agenda.

While I feel the trainee system needs adjusting, we shouldn't get rid of it. We also shouldn't get rid of all education and experience requirements as some have been stating like Maxine Waters. That opens up the government, financial institutions and banks to huge levels of fraud. That would never pass Congress, thank god.

Chart number of licensed real estate appraisers in California by year. Licensing was first mandatory in 1994 because of legislation. I've been appraising since 1984 as a real estate agent though no license was needed at the time. 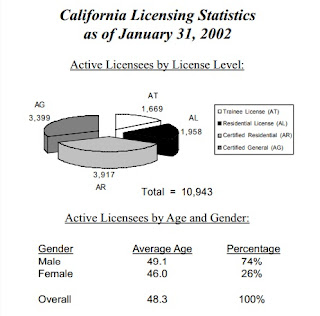 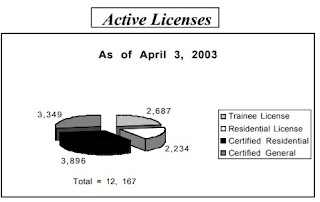 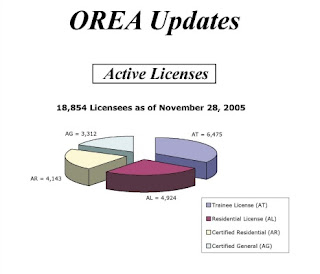 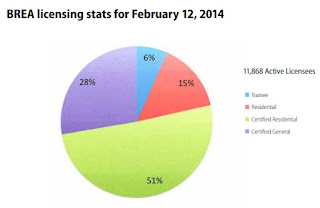 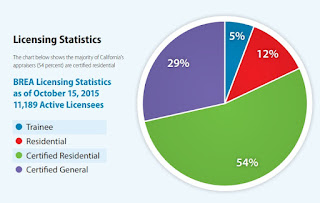 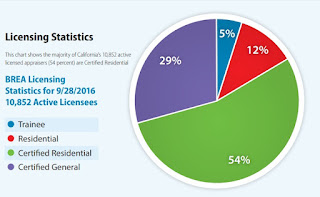 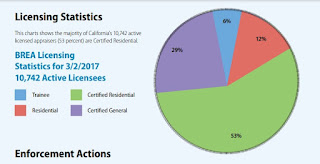 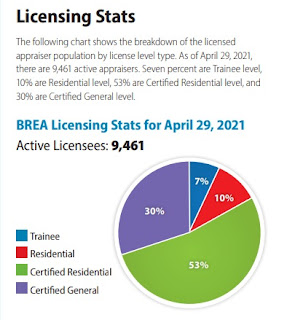