Richardson Family Park is located at 2700 S Budlong, Los Angeles, CA 90007. The park has a basketball court, children's playground and picnic tables. It's closed from sunset to dawn.

The park was developed by the Esperanza Community Housing Corp, a nonprofit neighborhood-based organization, and Martin Luther King Legacy Assoc with a Proposition K "LA for Kids" prog grant of $253,492 and with a commitment to transfer the deed and title to the City of LA, Dept of Rec & Parks for its maintenance.

Donald married Margaret Sample 1923-1991 in 1944 and had three children, James, Ronald and William. Below is Donald Richardson's photo and obituary.

"RICHARDSON Donald Jolliff (80) Died at home Friday evening July 14. A World War II hero of D-Day and Battle of the Bulge, Don faced all the challenges life gave him with great heart and determination, making the best of any situation. His life profoundly and positively impacted thousands of people. Born in Bakersfield, California and raised in Los Angeles, he graduated from UCLA and married Margaret Sample in 1943. Serving as teacher and Assistant Superintendent for LAUSD from 1947-1980. Don "retired" to become a tireless full-time volunteer leader-advocate for mental health at both the national and state levels. President of the National Alliance for the Mentally III (NAMI), and member of Rosalynn Carter's National Advisory Commission on Mental Health, Don was a principal contributor to the Surgeon General's Report on Mental Health, 2000. Honors include L.A. County's "Volunteer of the Year", California Psychological Association's "Distinguished Humanitarian Award" and U.S. Commissioner of Rehabilitation Services'" Award for Outstanding Contribution to the Disabled in America. Don had a lively sense of humor, enjoyed gardening, dancing and traveling. He was unfailingly loving and courageous. His life will continue to inspire those who knew him, including his three sons, two grandchildren, dear companion Wyoma Perryman, and many cherished friends. A memorial celebration will be held in his home in Los Angeles on Sunday, July 23, from 2:00-4:00 PM. In lieu of flowers, memorial donations to NAMI are encouraged."

The park location used to be the Richardson Family house located at 2700 S Budlong Ave, Los Angeles, California, 90007. It was built in 1904 for Adolph Herman who died 1939. The age of home was deduced by directory listings, voter records, census data, land sales in LA Times articles. It was sold as land in 1903. First directory listing as a home was 1904. Below is a photo from the USC archives which states 1930 2700 S Budlong Ave. 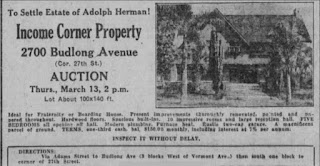 1971 the building was demolished. 1999 it was officially opened as a new park.

Below is the plat map of the site and plot plat for the new park.