Many people today have no idea how much it costs to build a new housing unit. Some are aghast at the $500K/unit estimate given to build housing units for the homeless or anyone. People also have no idea how long and difficult the process is today. Back in 1900 all you had to do at most was submit a two page form to the city and pay for the permits. You didn't need an architect, survey, soils, geological, engineer or even a drawing. You didn't need approval from your neighbors, other city departments, historical overlay zone committee members, building and safety, zoning and planning, dept of transportation... The cost today to build a unit is easily 100x what it was back in the day. It's also exponentially more difficult today. Today because there is no vacant land you have to demolish an existing structure and pay millions for the land. Then you have to deal with even more agencies and people. This article should explain some of the changes and challenges we face today.

Below is a complex building permit application which was approved. It's a two story 1906 very good quality home in Los Angeles. It cost $3,000 to build about 3,000 sf or $1/sf. This included everything for this high quality home. This was very, very expensive in 1906. This home exists today. 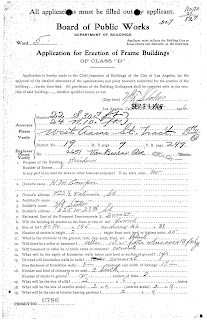 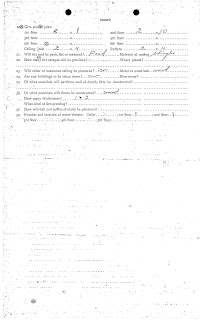 This home was built in a more rural area of Los Angeles in 1934. 672 sf for $1,000 or $1.40/sf. Look at this form. No architect, engineer, contractor. You could built it yourself. You didn't need a licensed contractor, plumber, electrician. There were no building and safety regulations or planning and zoning and no inspections. You want to build a house or school right next to a liquor store, highway, industrial plant? Okay. 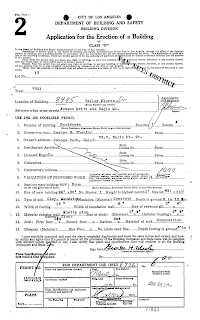 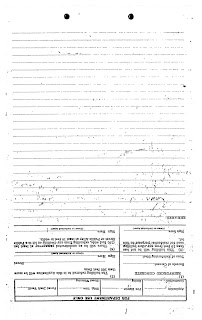 This home was built in 1952. Again, no architect, engineer but there's a contractor because this person doesn't want to build it himself. Can you imagine no building and safety regulations? This time there is a little sketch. 2,200 sf built for $8,300 or $3.77/sf. That's it. 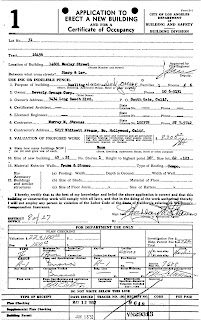 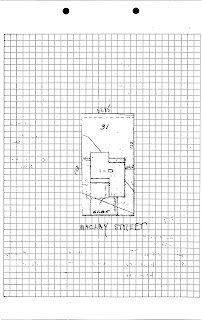 Below is the budget for a four-plex in the city of Los Angeles. This is the actual budget. Again, not my client. They paid $1.1M to buy a tear down home on an R2 lot. It cost $2,000,000 to build four units or $500,000 per unit. This developer is highly experienced. This soon to be property is in a not so good area of Los Angeles. This doesn't include a lot of other costs such as selling commission, transfer fees, property taxes...if they sell it. These people hold property and don't sell it. They'd have to sell over $2,000,000 to make a profit. We appraisers figure in a 20% profit so they would most likely sell it for $2,400,000 which seems about right based on the area. These are not luxury units. They are bare bones basic minimum requirement units. They're built dormitory style as if for students. 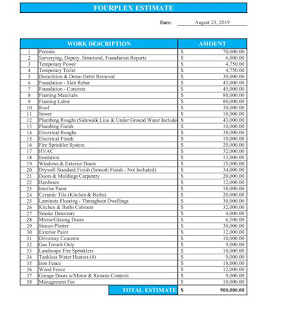 Cut to the chase today, 2020. It easily costs $175/sf to build an average low quality home. The amount of paperwork involved would be at least 3-5 feet tall not including plans and surveys. This cost doesn't include architect, survey, engineer, geo, soils, grading, utility hookups, appliances, finishes... It also doesn't include time, effort and money getting approvals from building and safety, planning and zoning, neighbors, NIMBYs, neighborhood lobbyists/extortionists, HPOZ Committee, transportation... It doesn't include mortgage payments, insurance during pre-contruction and during construction. It doesn't consider that you can only choose a piece of property with a very specific zoning in a very specific area. It can easily take two years from permit application to breaking ground. That's two years of holding costs just to do nothing. After you break ground it could take another year to have building and safety inspect the electrical, plumbing, mechanical... elements of your home so you can continue to the next step. It could take up to two more years getting a Certificate of Occupancy. All of these things take a lot of time and money.

This is why Mayor Eric Garcetti can fund a housing a project and not have a grand opening for at least two to five years. I was on the Prop F Committee to build the new animal shelters and fire stations. I've gone through the process over years with the City Committee. They actually did a really good job staying on top of things even when issues arose. Still, it took years and wasn't cheap.

The high cost of land, construction materials/labor, excessive red tape, NIMBYs dragging out the costly process is why we have a housing crisis. This is why we need housing for homeless, low income and even low middle class people today. Because of all the obstacles to building new units not enough units have been built over the past 30-40 years which is why rents are so high. It's a basic supply and demand issue. Rent control made the situation worse as landlords left the rental market and few new units could be built.

Some say "developers are just greedy." No, they're not. They're developers. Their goal is to build a project and make money. As an appraiser we figure in 20% developer profit. Many times they don't make 20%. They can end up losing their entire investment because building projects is extremely risky. Other people sell cars, clothing, medical services. They also expect to make a profit. It's just economics.

I've offered many solutions to these problems in my many articles about the housing crisis and solutions. The main solution is to limit NIMBY's power to stop projects. Some cookie cutter 2-8 unit projects should be automatically approved and need no further approvals from neighbors or NIMBYs. I just wrote this quick article so people can see how much it costs and how difficult it is today to build housing. People are yelling at Mayor Eric Garcetti like he is intentionally stalling on building new housing. He is doing everything in his power to build new units. He is stymied by NIMBYs.

Recently there was a project to build 250 units on vacant land with units for homeless, very low income, low income and market rent units. People fought it because they wanted more units for very low income. This was a private developer offering to build low income units when there is no law that states he must build super low income. NIMBYs  killed the project. A low income housing unit in the hand is better than two in the bush. NIMBYs are one of the biggest causes of the housing crisis.They have a place to live so eff everyone else.

FYI I have nothing to do with any of the homes listed above which is why I used them. I have never appraised, inspected, sold them. I just pulled some random buildings of specific ages.