Governor Gavin Newson signed Senate Bill SB 796 in 2021 allowing the State of California to allow Los Angeles County to give the land to the Bruce family.

Information about the land and value

Based on everything I've read the two lots are 33' x 100' each. They are located at 2600 The Strand, Manhattan Beach, California 90266, see map below. The original address was 2608 The Strand, Redondo Beach, CA. The Los Angeles County Lifeguard Training Facility is located directly on top of the land. The County offered to give them the exact two lots or two lots in the parking lot directly next to them. The County also offered to continue to use the land and just pay them rent.

Below are the parcels circled in red and a satellite image of the same. I don't know exactly which two parcels they are so I'll assume they are interior lots and not a corner. Update, first lot was lot 8 of block 5. They bought lot 9 for $10 in 1920. Both interior lots. The legal description of the entire site today which includes six lots is PECK'S MANHATTAN BEACH TRACT  LOTS 5,6,7,8,9 AND LOT 10. The Los Angeles County Tax Assessor number is 4177-024-901. 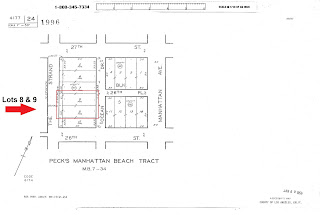 Below is a satellite image of the site. It's at the red tiled Lifeguard Training Center building. The Center and its parking lot are six lots. Two of the lots are the lots in question. 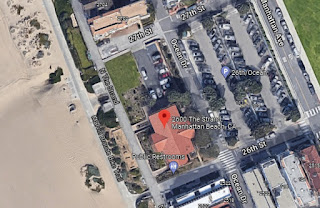 There is more land located on the other side of The Strand which meets the sand. This is the strip of land which used to be owned by George Peck. That land is now owned by the county and Federal government. I think they may have taken it by condemnation. It makes you wonder if the county would have taken Bruce's land by condemnation for the Lifeguard Center years later if Manhattan hadn't taken the land for a park. Of course the Lifeguard Center only took the land because it was a vacant park.

I've appraised a lot of property in this area on The Strand. I don't think the two lots are worth $75,000,000. I pity whoever does the appraisal  because if they don't come in around $75,000,000, they'll probably be called a racist, get negative reviews on their business, death threats and maybe even some complaints against their license. I know that sites right next to those lots are single family homes and duplexes. The lot would have ended up single family zoned if it wasn't condemned for a park. The Bruces were living at the property. It was sold as lots for homes. I pulled all properties located on The Strand right next to the site sold within the last two years. Obviously there are no land sales. If we look at the cheapest home, duplex sales on The Strand with similar sized lots we can get the land value.

Just for a high ballpark figure we can use 2508 The Strand one block away. This has a newer luxury quality amazing house on it and it just sold. If it were only land, it would have sold for $2,677/ft. Obviously the land is worth less than that because it has an amazing house on it. 6,666 sf Bruce Beach site x $2,677 is $17.8M. This would be the maximum, maximum the site would be worth today if it were sold on the open market.

Fortunately 2722 The Strand sold 11/2020 for $17.7M as a double lot development for land value. It's two blocks away. This is slightly larger than the Bruce site. Based on all I've seen the current market value for the site is somewhere about around $17.7M. This is not an appraisal as I have not inspected the site and don't know all the limitations and issues with the site. It might not be possible to build anything on the property today because of the California Coastal Commission, it's in a tsunami zone and low laying area. There could also be an issue because there's a lifeguard tower in front of the site. There is also the other piece of county land that is between the property and the beach/ocean. This is not waterfront property. If that's the case, they should just rent the site to the County Lifeguard Center as is. If they try to develop it or sell it for development, I see a lot of litigation, costs and hassles by neighbors and government agencies.

It'll be interesting to see if this opens up the flood gates for more people wanting back the land they sold, gave away, had condemned, stolen by the government years ago. I could really see Native American Indians asking for their land back. Their land was stolen outright except for a few who sold though not on fair terms. Some original Mexican owners who owned the land after Native American Indians would also be entitled to some land as well. They had their land stolen or swindled from them. I could see others just wanting to renegotiate or take advantage of the huge increase in real estate values.

UPDATE: A recent article stated the Los Angeles County Tax Assessor will be reappraising the property with "no zoning restrictions as is." I assume this will be for tax purposes of the assessor is appraising it. If they charge transfer tax or capital gains, there will be a huge tax. They'd have to sell or lease it back instantly. No zoning restrictions means it could be used as commercial, retail, hotel ... anything. I appraised it as it's most likely zoning which is residential. It would be worth more with no zoning restrictions. As they are only two small interior lots bounded by the Life Guard building and parking lot there is no way they would really build anything like a hotel or restaurant. With the Coastal Commission, single family neighbors, NIMBYs and others I doubt they could build anything other than residential. At that point I think the Life Guard would have to move the center entirely.

Just found this great history of the Bruce's and their land after I wrote the article.

Here is a thesis someone wrote about Bruce's Beach from 1956.

Los Angeles County report on how the land would be returned. They suggest maybe swapping some land in the park for the two lots. Many suggestions.

Here's a map of tract 8867 which shows people used to own the lots basically on the sand west of The Strand. All that land now belongs to the government as the high tide lines have changed.

Another old plat map before the area was further subdivided