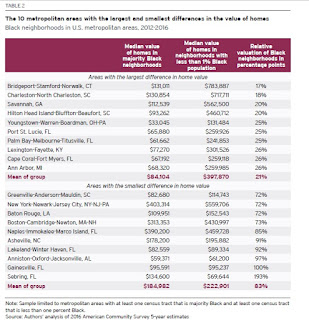 Here is Table 6, the 10 metropolitan areas with the most and least devaluation of homes. The ones with the most alleged devaluation due to black skin color are depressed areas. Some neighborhoods in Detroit, Michigan? The city is auctioning off vacant homes for $1,000 just so they don't have to demolish them. I would bet that people who could afford to leave those specific neighborhoods left. Those that couldn't are still there.
Per the chart, "Devaluation measure estimates median list price per sq foot after adjusting for home and neighborhood quality." We still don't know exactly how the home and neighborhood qualities were derived. Perry doesn't show the math. 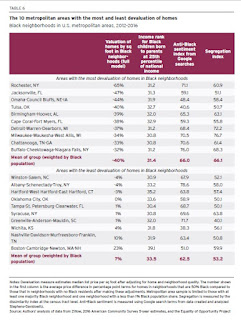 Perry has now added an "anti black sentiment index" from Stephens-Davidowitz. The "paper" is a New York Times op-ed opinion piece (pay wall). It's not peer reviewed research. Anyone can write an op-ed piece. The paper is based on "the percent of Google search queries that include racially charged language." The author Seth Stephens-Davidowitz then compared the search results to Obama's votes. His conclusion was anti black sentiment cost Obama 4% in votes in 2008 and 2012. Obama won. Did Obama win in spite of this or maybe he won because people wanted a black President and he was extremely well qualified? Perry is not only cherry picking his groups for comparisons but also his reference material.
How much of the US fell into only those two very specific small categories of 50%+ black verses 0-1% white? Perry states that 10% of the US falls into the category of "primarily black." An analysis of only 10% of the country does not represent the entire country, see Perry's map below. Per the map this 10% appears to only be in the East and a little in the South. This is still only the percentage of the population living in the specific area and not the percentage of all black homeowners in that area or the entire country. Most homes in less wealthy areas which tend to have more people of color are actually owned by white investors or large public and private corporations. Perry then compared those values to areas with only 1% black people. Again, that would be a very small group for comparison. Of course it will show differences when you intentionally choose two very small and  extremely different groups for comparison. This is very misleading statistical analysis. It's as bad as any Fox News "statistics" or poll. 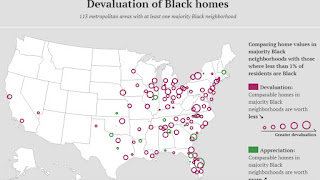