Real estate appraisers measure homes using the ANSI method. ANSI stands for the American National Standard Institute. It is a square footage method for calculating the gross living area of a residential property. The standard is ANSI Z765-2013. It was first approved in 1996 by the American Institute of Architects, the Appraisal Foundation, the Building Owners and Managers Association, the Manufactured Housing Institute, the National Association of Realtors, Fannie Mae, Freddie Mac, HUD and others. Here is the 2020 draft though the 2013 version is approved.

"For detached single-family houses, the finished square footage of each level is the sum of finished areas on that level measured at floor level to the exterior finished surface of the outside walls."

A real estate appraisal will include the total number of rooms, bedrooms and bathrooms. An average home with a living room, dining room, kitchen, two bedrooms, one full bathroom, one half bathroom would have five rooms, two bedrooms and 1.1 bathrooms. A 3/4 bathroom which is a toilet, sink and shower is considered a full bathroom. A half bath only has a toilet and sink.

A room does not have to be divided by walls to be considered a room. An example would be a large open living/dining area. It would be considered a living room and a dining room. "Bathrooms, laundry rooms, sun rooms, closets, storage rooms and entries are not usually considered rooms."

A bedroom generally has a closet. If it's an older home, it may have been built without a closet. It could still be considered a bedroom if it's at least minimum size and meets all other requirements for a bedroom. A legal bedroom would have its own access off a hallway or main room. The only access cannot be through another bedroom. It would most likely be considered a sitting room for the adjacent bedroom in that case.

Openings to the Floor Below 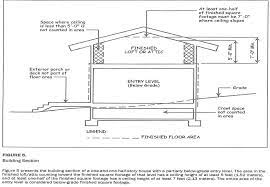 "Lofts and finished attics must be accessible by a conventional stairway or other access to be counted. If you can only reach the loft by climbing a ladder or very steep small stairs, it’s not part of the  finished floor area regardless of the ceiling height." The loft or attic must be a legal conversion completed with a building permit and included in the tax assessment roll to be included in the gross living area. It must be finished with heat.

A finished area that is not connected could be a separate guest house, separate Accessory Dwelling Unit ADU, separate mother in law unit or converted garage. Those areas will be measured and included in the report. They just won't be included in the gross living area of the home.

Unfinished, Unpermitted Areas which are not included

"Where finished and unfinished areas are adjacent on the same level, the finished square footage is calculated by measuring to the exterior edge or unfinished surface of any interior partition between the areas."

Above- and Below-Grade Finished Areas 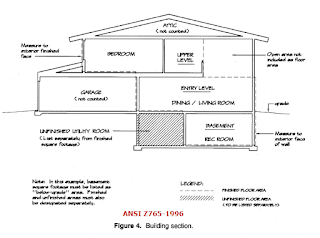 The exception to the above and below grade area is multilevel homes built on a sloped lot.

From Fannie Mae in regard to basements and multilevel homes. "For consistency in the sales comparison analysis, the appraiser should compare above-grade areas to above-grade areas and below-grade areas to below-grade areas. The appraiser may need to deviate from this approach if the style of the subject property or any of the comparables does not lend itself to such comparisons. For example, a property built into the side of a hill where the lower level is significantly out of ground, the interior finish is equal throughout the house, and the flow and function of the layout is accepted by the local market, may require the gross living area to include both levels. However, in such instances, the appraiser must be consistent throughout the appraisal in his or her analysis and explain the reason for the deviation, clearly describing the comparisons that were made."

Below is a home that fits that exception which is very common here in Los Angeles, California. The middle level is at street level. The lower level is considered above grade because it's built on a sloped lot and three sides are out of ground. It is common for the area. 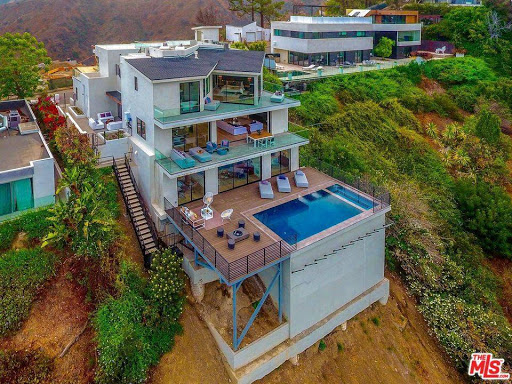 The main purpose of using ANSI is consistency. People need to be able to compare apples with apples. If all real estate agents, developers, appraisers used ANSI and stated ANSI measurements on their reports and listings, it would make for more transparent real estate transactions. Unfortunately most living area sizes in real estate listings do not comply with ANSI. The size listed on MLS listings is generally larger than the legal gross living area. That's why they include the disclaimer on the bottom stating they don't guarantee the size or legal bed, bath count.