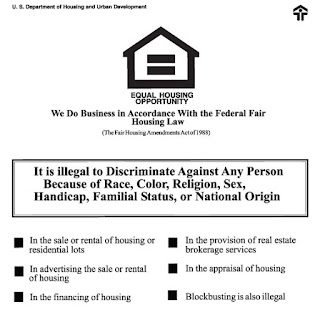 Mary Cummins real estate appraiser appraisal Los Angeles California Fair Housing Act anti-discrimination
Title VIII of the Civil Rights Act of 1968 is commonly referred to as the Fair Housing Act of 1968. Since 1968 its protections have been expanded significantly by amendment. The Office of Fair Housing and Equal Opportunity within the U.S. Department of Housing and Urban Development is charged with administering and enforcing this law.
The Civil Rights Act of 1968 prohibited the following forms of housing discrimination:
Refusal to sell or rent a dwelling to any person because of their race, color, religion or national origin. Discrimination on the basis of sex was added in 1974, and people with disabilities and families with children were added to the list of protected classes in 1988.
Discrimination against a person in the terms, conditions or privilege of the sale or rental of a dwelling.
Advertising the sale or rental of a dwelling indicating preference of discrimination based on race, color, religion or national origin. This provision was also amended to include sex, disability, and having children.
Coercing, threatening, intimidating, or interfering with a person's enjoyment or exercise of housing rights based on discriminatory reasons or retaliating against a person or organization that aids or encourages the exercise or enjoyment of [fair housing] rights.
Neglecting maintenance and repairs of the units rented by people based on race, religion, sex, or any other discriminatory demographic.
Restricting access to services and amenities on the basis of the renter's race, gender, religion, or nationality.
In 2012, the United States Department of Housing and Urban Development's Office of Fair Housing and Equal Opportunity issued a regulation prohibiting LGBT discrimination in federally assisted housing programs. The Supreme Court ruled in 2020 that discrimination on the basis of "sex" includes discrimination on the basis of sexual orientation and gender identity. It was not until February 2021 that Housing and Urban Development issued a rule change under President Joe Biden to implement this decision. In addition, many states, cities and towns have passed laws prohibiting discrimination in housing based on sexual orientation and gender identity.
Types of allowed discrimination
Only certain kinds of discrimination are covered by fair housing laws. Landlords are not required by law to rent to any tenant who applies for a property. Landlords can select tenants based on objective business criteria, such as the applicant's ability to pay the rent and take care of the property. Landlords can lawfully discriminate against tenants with bad credit histories or low incomes, and (except in some areas) do not have to rent to tenants who will be receiving Section 8 vouchers. Landlords must be consistent in the screening, treat tenants who are inside and outside the protected classes in the same manner, and should document any legitimate business reason for not renting to a prospective tenant. As of 2010, no federal protection against discrimination based on sexual orientation or gender identity is provided, but protections exist in some localities.
The United States Department of Housing and Urban Development has stated that buyers and renters may discriminate and may request real estate agents representing them to limit home searches to parameters that are discriminatory. The primary purpose of the Fair Housing Act is to protect the buyer's (and renter's) right to seek a dwelling anywhere they choose. It protects the buyer's right to discriminate by prohibiting certain discriminatory acts by sellers, landlords, and real estate agents. 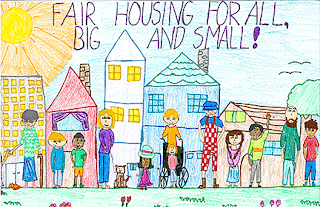