Redlining - Definition: To refuse (a loan or insurance) to someone because they live in an area deemed to be a poor financial risk.
The National Housing Act of 1934 created the Federal Housing Administration FHA to help revive the US economy after the Great Depression. The purpose of the FHA was to provide affordable loans so people could buy homes. Private lenders would make the loans and the federal government would insure them for losses. The new loans would have lower down payments, smaller monthly payments and were more affordable.
President Roosevelt's New Deal created the Home Owners Loan Corporation to help process the home loans. "To facilitate private investment through the FHA, the HOLC, and the Federal Home Loan Board Bank (FHLBB), the federal government crafted a national set of standards for assessing mortgage risk. Through its 1935 City Survey Program, the HOLC gathered data about neighborhoods from approximately 239 cities and compiled the results into a rating system ranging from A to D. Communities with A ratings represented the best investments for homeowners and banks alike; B, neighborhoods that were still desirable, C, those in decline, and D, areas considered hazardous. "A" communities generally had access to better amenities such as better schools, parks, shopping, transportation and were therefore more desirable. "D" communities generally were located near less desirable features such as industrial properties and they had fewer and lower quality amenities." To visually capture these rankings, the HOLC then turned these ratings into color-coded maps, using green for A, blue for B, yellow for C, and red for D – the origin of the term “redlining.”
Many researchers have stated the HOLC maps were more a consequence of existing ordinary and discriminatory lending practices as opposed to being a cause for them. Still, the spatial isolation could make it a self-fulfilling prophecy over time. Many have stated the ratings were just a description of the current state of the real estate cycle for each neighborhood. A "D" area could be revitalized, redeveloped into a "B" area. If that area improved with the addition of more public transportation, parks, schools, shopping, it could become an "A" area. This is what has happened in downtown Los Angeles and other areas such as Boyle Heights which some refer to as gentrification. Others have shown how the HOLC grades were more a function of factors such as housing condition, residential density, and housing type, as opposed to solely ethnic and racial composition. If the ethnic and racial compositions were not included in the maps, it wouldn't have affected their accuracy in determining loan risk. Over time some of these ratings became more associated with race and immigration status than unbiased risk. The term "red zone" ended up having a connotation of POC, immigrants living in poor areas. Generally poorer people, people of color and immigrants lived in the C, D areas because it was less expensive. Over time the redlining caused less investment in C, D areas and more in A, B areas causing a greater divide between the areas.
It must be noted that the actual HOLC maps never stated "D is a black area" or "D is an immigrant area." There were worksheets prepared by individuals which were used to determine the risk of each specific area. Those worksheets included many factors and descriptions including the following from top to bottom (see worksheet for an area of Los Angeles below), population, class and occupation, nationalities, income, "negro" %, building type, size, age, condition, owner/tenant % occupancy, home price bracket, sales demand, predicted price trend, sales demand, new construction, rate of sale of new construction, overhang of HOLC properties, description and characteristic of area.
Today in real estate appraisal and analysis we use all of the above factors except race and nationality. It's a violation of the Fair Housing Act to consider or mention race or nationality because it would be discrimination. All of the other factors are good indicators of value and trends. Now the US Census does include race and whether or not someone is "foreign born." The census has nothing to do with real estate sales or loans. It's more a population study.
That said the areas ended up correlating with higher populations of POC, immigrants and poor people based on affordability. There is a direct correlation between income and POC. If the government wants to correct the wealth gap they need to fix the income gap. Appraisers can't do it. If one were to note today property in the four distinct phases or life cycles of real estate, one would probably find POC, immigrants and poor people in those same areas because hazardous, run down, less desirable areas have lower rent and less expensive homes to buy. People buy or rent what they can afford based on their income. Wealth is tied to income. Race correlates with income. The correlation is NOT race = home valuation. The causation is income.
The Fair Housing Act of 1968 made redlining illegal. It became "unlawful to discriminate in the terms, conditions, or privileges of sale of a dwelling because of race or national origin." A bank could no longer refuse to make loans in certain areas based on those factors. Banks can only refuse loans based on the credit, credit history, income, assets, debts, expenses of the buyer, borrower.
I am using this example below because it specifically mentions race, nationalities. Not all of the worksheets noted it. It was up to the individual filling in the form. The race, nationality had no effect on the rating. It was just reporting. They could have omitted it and ratings would have been the same. We know that race, immigrant status, being poor correlated with the lower C and D ratings because they correlated with lower income, lower net financial worth, lower credit ratings which affects affordability. This is not to say one caused the other. This is just to aid in the explanation of what "redlining" was. 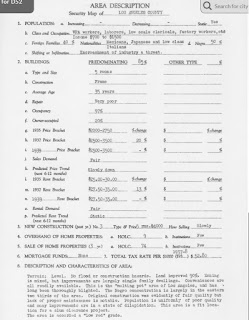 Another important thing to consider is most people in the "redlined" areas were renters. Generally these areas are 80% tenants. The people who owned the property were mainly white. White property owners were the ones being denied loans or charged more for the loans. POC property owners were in the minority but they were also denied loans or charged more. And again this is only for government backed loans. People still got loans on the properties from sub prime lenders. We still have sub prime lenders today who do riskier loans. Those riskier loans are for riskier borrows or properties. A risky borrower has little cash, poor credit, lots of debt, shorter confirmed work history, undocumented work history, little income showing on tax returns, income only from retirement funds or investment property... A risky property is located in a wildfire area, higher risk flood zone, lava zone, tornado zone, next to river/ocean/lake, landslide area, on an earthquake fault, condo development with a major lawsuit, condo development with insufficient repair funds, older property, property not in average condition, property that needs seismic word, property with tenants that refuse to move, property that is behind on property taxes... Notice all these risk factors have nothing to do with race or color. These are just loan risk factors. Any safe bank would consider all of these risk factors especially if they are offering and reselling government backed loans.
Mary Cummins of Animal Advocates is a wildlife rehabilitator licensed by the