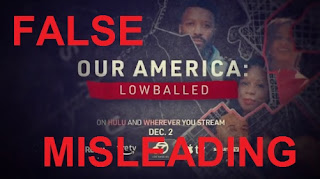 Appraisers need to be ready to counter this false and misleading series from ABC titled "Our America: Lowballed" coming in December by Julian Glover. Glover is the self proclaimed "race reporter" for ABC7. Read the pitch on this page linked below. It says white appraisers "lowball" and "rob" Blacks and Latinos. They say it's based on ABC's research but it's actually based on Andre Perry's false error filled non peer reviewed paper. People with less money buy less expensive homes! Blacks and Latinos have less money because of the income gap! Appraisers aren't lowballing the public! Fix the income gap!

This is reckless journalism at its worst. I've emailed Julian Glover the truth with evidence many times but he's not interested in facts. He's only interested in hate filled sensationalist articles. I doubt he interviewed any appraisers for the series. I also contacted Maxine Waters' office trying to set up a meeting but she refused. I contacted Marcia Fudge as well about the inaccuracies in her reports and statements. No reply.

The pitch shows they will not be stating the truth or using independent statistics like American Enterprise Institute. Andre Perry's paper used inaccurate Zillow statistics! AEI debunked Perry's "research." ABC is doing this for ratings to sell advertising for money. Julian Glover is doing it for self promotion. He's covered a couple of these stories in California and asks people to send in related tips. Below is the link to a pitch they sent to a real estate website manager asking them to promote their false and misleading narrative https://appraisersblogs.com/lowballed-it-is-open-season-on-appraisers

This is ABC's false narrative. '"Our America: Lowballed" follows Black and Latino families as they fight for fair home values after lower than expected appraisals. ABC's 18-month long investigation explores appraisal discrimination and solutions to a problem potentially costing families billions in equity.'

The show covers cases which I have researched in great detail. Research by a real estate appraiser with almost 40 years of experience shows there was no lowballing or discrimination in these cases. The homes were appraised for market value based on similar local sales. The show covers the following cases I covered. I recognized the people. There was another person I didn't recognize and they don't list the properties. I'll try to find out and post it later.

I think it includes the story about Cora Robinson and her daughter which Julian Glover and I covered.

In the video: Vice President Kamala Harris, Andre Perry, Maxine Waters, Paul & Tenisha Austin, Marcia Fudge, Carlette Duffy. When it comes to the issue of real estate appraisers lowballing all of these people are not telling the truth. Andre Perry's research was busted by American Enterprise Institute. I researched Marcia Fudge's false story about being lowballed herself which she restates in this series. She was comparing her much older lower quality ranch home to a totally new development across the highway. Carlette Duffy is crying in the video. Did nobody bother to research the fact that she's cried racial discrimination in the past in a lawsuit against the government and lost? The linked article above proves the original appraisal was correct in Duffy's case. Her house was a burned out shell that someone did a quick redo when it should have been demolished.

All real estate appraisers need to speak out before, during and after this misleading series is released. I know it's difficult because you will be attacked. You will be called a "racist" just for commenting "hello." It would be safer to use a nom de plum so they don't attack your home, family and business.